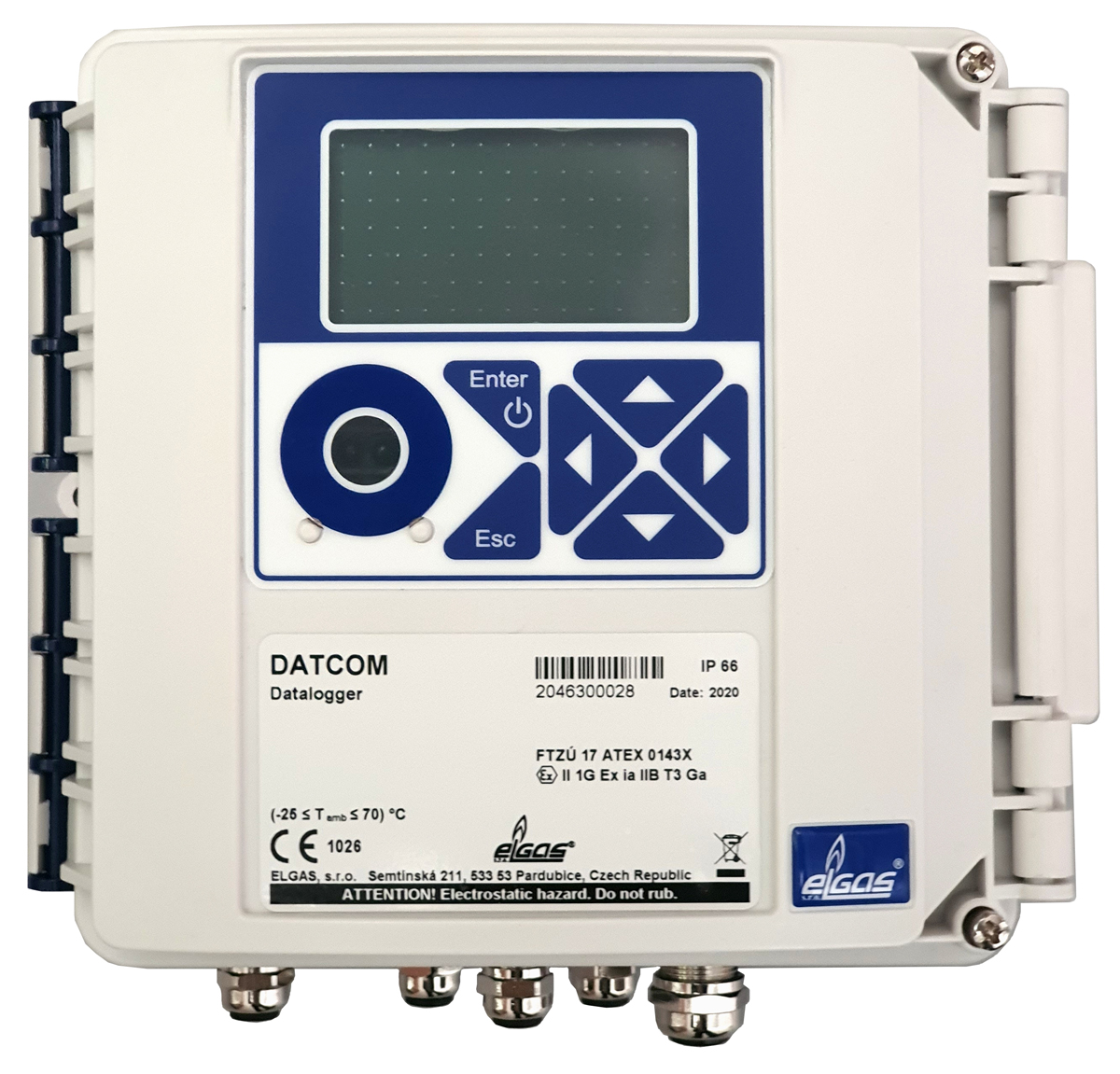 Electronic Datalogger DATCOM is a battery powered device intended for measurement and recording the time behaviour of physical quantities. This device is fed from an internal battery with long service life and there is also enabled the connection of external source.

Its construction answers to the conditions of operation at explosion hazard areas. It is a compact device in a metal cabinet securing the necessary shielding of a device. Used material ensures the necessary robustness of a device and together with used sealing of a lid sinks the influence of external electromagnetic interference and secures the device resistance from EMC aspect.

On the front side of a device there is placed a two-line alphanumeric LCD display (2 x 16 characters). In the frame of display there is placed the indicative LED diode. Below the display on right side there are six bottoms of foil keyboard for device control. On left side next to the keyboard there is a vane for optical communication head and for communication via IrDA® interface.

The device is constructed for use of pressure transducers of relative and absolute pressure as well. For connecting the binary signals there is determined the nine-pole connector at left wall of the cabinet of a  Datalogger.

By help of in-built RS-485 interface there is possible the mutual interconnection of several Dataloggers into a local network. Such established local network of Dataloggers it is possible to connect by help of some communication module (which is a part of optional accessories) to the telephone modem (including GSM) or to radiomodem. Inbuilt Datalogger SW enables the generating of alarm signals and to transfer them to a superior system.

Communication PC with Datalogger it is possible to perform technically via any inbuilt DATACOM interface, it means via RS 232, RS 485, via optical head or via IrDA® interface. Delivered programming equipment therewithal serves for setting up the Datalogger parameters.

In full mounting the DATCOM enables the following:

Although from outside DATCOM appears to be a compact device, from the peripheral point of view this device consists of two parts. Measurement and storage part with communication possibilities are both controlled by stand-alone processor.

Connection of binary input is realized by 9 pin connector. Direct connection of signal from binary sensors into this connector is feasible, if all the signals are carried in one cable. With more signals is necessary to use multiple modules DATCOM-R1 or DATCOM-R2 (delivered as accessories).

Impulse inputs - standardly one impulse input for connecting contact of gas meter. It is also possible to connect another second impulse input. For this one is used binary input B1, which is configured by software.

- Inputs B1 to B4 - so-called fast inputs, change of condition is evaluated immediately
- Inputs B5 to B8 - so-called slow inputs, detection of condition of those inputs proceeds cyclically with reading binary inputs period 30 s

For each binary input is defined its requested active level. During reaching active level can be generated alarm signal.

DATCOM has inbuilt following archives for storing measured data and other auxiliary data:

Record period is set for each measured quantity separately. In a case of binary input are into this archive entered conditions changes of any binary inputs with corresponding time stamp.

Daily archive is used for storing resulting values of measured (more accurately stored) quantities in individual days. Daily archive is calculated in the moment of displaying its data on display of datalogger from data in data archive and can not be read via communication line as any other archives. Values in daily archive are dependent on setting of the beginning of gas day.

During occurrence or termination of any of the given facts is in archive created record about that event. In archive is recorded date and time of event occurrence and its brief name. If some event already lasts and another occurs, new record is made into archive. In this record are contained information about new event as well as about momently lasting events.

Fast archive - is a special type of archive for time monitoring of flow of one of the pressure channel with special switching regime. This archive serves for storage of measured momentary values only in some periods of time. It can also be used as auxiliary archive for one of the pressure input. Record into this archive is conducted with measurement period and is started only by fulfilling of the so-called starting conditions. Definition of starting conditions conducts user during setting parameters of datalogger via PC.

Starting of fast archive can be derived from:

In this part are described technical communication possibilities, which do not take into account requirement for keeping service feature in a hazardous area. Datalogger is equipped with communication interfaces for communication with other devices.

Which are the following:

Next to standard way of communication, when connection with datalogger is initiated from the control computer (that means from above), initiates DATCOM alone in the case of alarm signal occurrence getting in contact with communication computer and sending alarm report.

Busbar RS 485 requires its own feeding, which can not be obtained by datalogger and is therefore secured by communication module. For realization of bus method interconnection are therefore in datalogger terminals for feeder cable and cable for connection to other datalogger.

Interface RS 232 is again galvanically separated and is intended for direct connection of one of datalogger with computer.

With datalogger can be simultaneously communicated max. via two interfaces:

During use of IrDA® is necessary to activate this interface by command from keyboard of datalogger.

For securing electrical energy savings and thereby extension of internal battery usage, is activated putting out some of circuits, which are not in a given period of time needed for the proper function of device. Therefore is prolonged time of device usage without battery exchange min. for 6 years.